The Twist groups performed their new productions at the Uhuru Festival at Wushwini Arts Centre in April, and are now taking these shows home, performing in their own communities. These shows included the following: 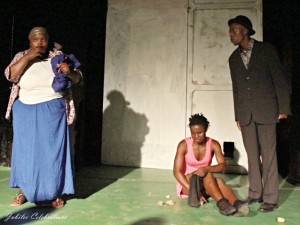 Members of the four Twist groups will be travelling to the National Arts Festival in July to take part in the Remix-Lab Project, an intensive ten day immersion into the festival, filled with workshops, performances and discussions. They will also be performing their work for their peers from other community theatre groups around the country. For many this is their first trip to the festival, and we wish them well! The Novel-Script Project Twist’s annual writer’s development programme runs in Grahamstown from 30 June. The project brings together selected writers from South Africa, Zimbabwe, Mozambique and the Netherlands. The starting point for the project is the novel, “Sleepwalking Land” by the acclaimed Mozambiquan author, Mia Couto, and writers develop theatre scripts inspired by this novel over an intensive week-long workshop. The finished scripts will be presented at a free public performance at 2 pm on Monday 7 July at the Recreation Centre in Albany Road, Grahamstown. All are welcome. Book Launch by Twist Directors Roel Twijnstra and Emma Durden launch their new book: Theatre directing in SA; Skills and Inspirations as part of the National Arts Festival at 4pm on Sunday 6 July at Eden Grove . It is a user-friendly introduction to the role of the theatre director and the concept of stage-craft written for those who are stepping into the role of director for the first time, or those who feel that they need a refresher course and new inspirations. The book includes interviews with ten contemporary South African directors, exploring their journeys into theatre and how they came to find themselves in the director’s chair. Twist Welcomes a New Administrator

We were joined in May by Mbali Mkhwanazi, a UKZN Honours graduate, who is working with us as an administrator for the next few months. Mbali has been assisting with plans for the upcoming projects at the National Arts Festival, as well as working with an external evaluation of Twists’ work over the last year. We hope she enjoys her time with Twist! TWIST THEATRE DEVELOPMENT PROJECTS IS SUPPORTED BY THE NATIONAL LOTTERY DISTRIBUTION TRUST FUND (NLDTF) AND: